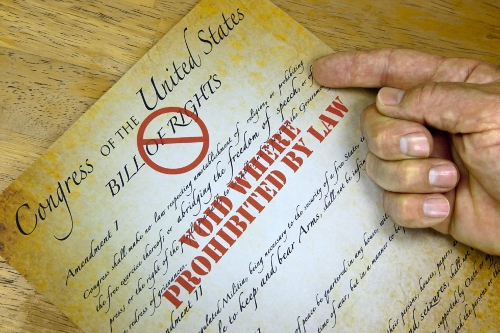 The “infrastructure bill” is part of a long line of intolerable acts aimed at voiding the Bill of Rights and transferring wealth from workers and producers to the ruling class who produce nothing of value for society at large.
For lovers of liberty and American patriots who don’t absolutely hate their own country, like the ruling class do, the “infrastructure bill” is the latest in a string of intolerable acts which appear to evince a design of tyranny. From wasteful spending to requiring a breathalyzer or other “alcohol monitoring” and even cameras in new cars to a per mile user fee that turns all roads into toll roads, this intolerable act is yet another example of top-down control and wealth redistribution from the workers and producers to the uber rich ruling class and their core of voters.
Cryptocurrency miners and blockchain software developers dodged the bullet of being required to act as brokers with privacy-busting reporting requirements to our lecherous IRS, those “swarms of officers” whose locust-like parasitism on our wealth is notorious and getting sinister. But the number of devilish details meant to fund the ruling class, further transform average people into serfs, and buy off a zombie army of mindless drone voters, in this bill, supported by the GOP and the Democrats, may be too numerous for anyone to add up. At over 2700 pages, this bill is a mass compilation of bad ideas that make the ruling class richer and you less free. It is an affront to the Bill of Rights, common decency, and the free market all designed to create the groundwork for a one-party authoritarian regime.
Finding ways to get over and around its onerous provisions will be a virtual cottage industry and any alleged good it fulfills will be greatly outweighed by its baneful impact on your liberty and wealth, unless you are part of the ruling class or a target of their vote-buying largesse.
Back when being an American meant something more than just living in this country, back when it meant a passion for freedom and a strong and courageous determination to stand for liberty and vanquish freedom takers, bills like this would be responded to quite differently. The officials behind these bills would become pariahs and new elections would sweep them all out of power.
The tyranny is real and the intent to defraud the public and transform this country into a one-party authoritarian regime is also obvious. But the outrage is a murmur, a pale whisper, and nobody appears to back justice against the freedom-taking ruling class and their collaborators in Congress. Neither local governments nor states and certainly not the faux opposition party, the Republicans, stand with average Americans who just want to be left alone to live their lives in peace.
Those who desire freedom have a high mountain to climb and the odds are stacked against their efforts to push through and obtain freedom, prosperity, peace, and safety. But the battle to pursue freedom and defeat the freedom taking ruling class is incumbent upon us all, whether we desire it or not, because we, the average people, are the target. What is more, as these intolerable acts pile up, and given the totalitarian bent of the Party in power this is just the start of their war on freedom, you will have no way to avoid the baneful effects of their efforts.
The infrastructure bill is another intolerable act that is, as all such acts, aimed at the heart of freedom and designed to further plunder your wealth.
Return to News